It was another spectacular day on Waitemata Harbour for the final day of racing for the 2017 18’ Skiff New Zealand Championship.

Racing from Royal Akarana Yacht Club, home to the Auckland Skiff League, all boats bar C-Tech opted for the number two rig, while they went for the number one for the three races.

There was confusion with the timing for the first race of the day and most boats were unprepared when the class flag was lowered, however amongst the uncertainty, Yamaha still managed to have a great start leading the fleet.

Yamaha was first around the top mark and quickly went for the gybe set in one fluid motion, followed by Maersk Line then Knight Frank.

Yamaha led into the first bottom mark rounding with Knight Frank still chasing their tail in second. C-Tech made big inroads into Maersk Line sitting on their hip to let them know they were there.

Coming back into the top mark for the second and final time, it was Yamaha who was still in the lead followed again by Knight Frank. C-Tech managed to sneak ahead of Maersk Line and went around in third place and headed straight for Bean Rock. Maeark Line split, did an early gybe and raced towards North Head. The move paid off for C-Tech having found more breeze towards the light house and managed to sprint ahead of Knight Frank who opted for the middle of the course.

Maersk Line went so close into North Head it looked as though they were going to mount the shoreline but it paid off and they too managed to get ahead of Knight Frank. Events Clothing also had a glamour final leg passing Knight Frank.

The second windward/leeward of the day started in around 15 knots of south westerly breeze. ASCC made it difficult for themselves capsizing in the starting sequence and as such were late for the start. The rest of the fleet managed to get away well making it anyone’s race to the top mark.

AON Black went left and were looking glamourous with C-Tech and Events Clothing going right. But it was Yamaha once again in the lead.

Yamaha led around the first mark rounding followed by C-Tech and Maersk Line. The round was very compact with Knight Frank, Events Clothing and AON Black following in closely.

Maersk Line and Knight Frank headed towards Torpedo with Events Clothing following close behind. Yamaha and C-Tech, along with AON Black all opted to head towards Bean Rock.

Yamaha led around the bottom mark followed by Knight Frank and Maersk Line. The fleet then followed with all boats heading towards North Head.

While Yamaha put the foot down and steamed towards the mark, AON Black capsized underneath North Head giving ASCC a chance to sneak through.

When Yamaha reached the top mark for the final time they gybed set to race towards the finish. They put around 30 boat lengths between them and second placed C-Tech who were forced to tack into the mark due to ongoing wind shifts.

But C-Tech managed use those shifts to their advantage on the downwind and caught well up to Yamaha who only managed to finish 10 seconds ahead.

It was a race for third place with just 15 seconds separating Knight Frank, Maersk Line and Events Clothing.

The final race of the contest was a harbour course which took the fleet from Orakei to Bean Rock, Rough Rock, Orakei, Rough Rock and then the finish where they started at North Head.

There was a beef up at the start between Marsk Line and AON Back with AON Black capsizing and getting a hold of Maersk Line. Unfortunately for Maersk Line this resulted in them having a shocker of a start. C-Tech were over at the start and were forced to head back to redeem themselves.
On clearing their start, C-Tech raced right into North Head completely splitting from the fleet who all opted to head left towards Bean Rock.

Knight Frank were to leeward of Yamaha but clear ahead followed by ASCC, Events Clothing then Maersk Line.

But Yamaha once again proved to be too good rounding the first mark in the lead followed by Knight Frank who were 10 boats lengths behind. The individual recall against C-Tech didn’t seem to faze them as they rounded in third place showing that the North Head side of the course pays off. They were followed by ASCC then Events Clothing. Maersk Line was still suffering from the blunder at the start but still had their toes in the race.

At the first wing mark Yamaha extended their lead to around 40 boats lengths having pulled away from Knight Frank who held onto second. C-Tech undid some of their good work and went for a swim. ASCC looked hot at this point screaming towards the mark.

With Yamaha still leading it was a fight for the minor places. Knight Frank was holding onto second with C-Tech in third followed by ASCC, Maersk Line and Events Clothing who dropped their kite into the tide at the bottom mark.

Yamaha smoked around the course leaving the fight for second open. C-Tech recovered from their bad start managing to sneak ahead of Knight Frank.

The breeze dropped dramatically towards the end of the race averaging around 8 knots. But it was Yamaha’s day again and the drop in pressure wasn’t an issue for them. Dave McDiarmid, Matt Steven and Brad Collins won all six races to once again show they are a force to be reckoned with. C-Tech finished the final race in second putting them second overall for the regatta. Although Maersk Line had a bad last race, they managed to hold onto third overall.

“It’s been an alright regatta for us but it hasn’t been the best,” said Yamaha skipper Dave McDiarmid post racing.

“It’s been about 20 knots every race day since we got back from Fiji last year so we haven’t had any practice with the number one and the JJ’s are predominately number one rig race days. But our crew work is going good and that’s what we have been concentrating on but again it’s all been practicing with the number two rig. Anything can happen at the JJ’s,” continue McDiarmid.

Four boats will travel to Sydney for the JJ’s Giltinan regatta representing Royal Akarana Yacht Club and the Auckland Skiff League. Yamaha, C-Tech, Maesk Line and Knight Frank have loaded their boats into two containers which get collected on Waitangi Day. 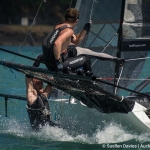 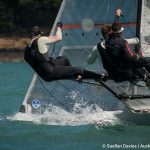 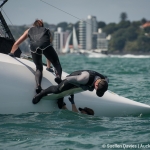 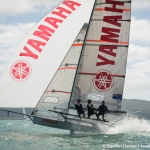 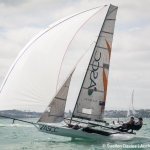 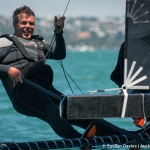 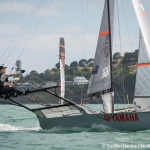 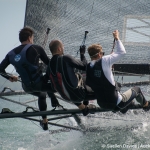 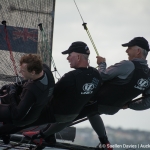 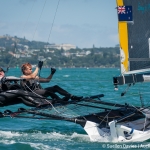 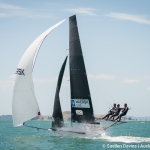 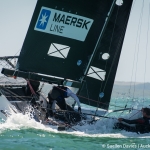 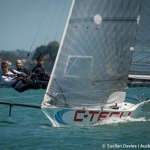 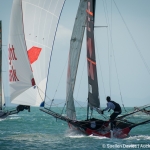 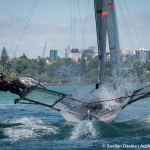 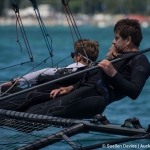 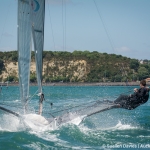 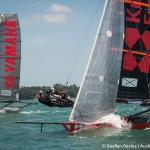 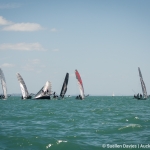 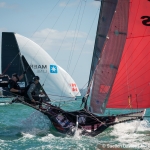 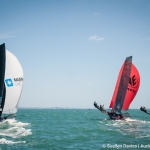 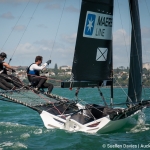 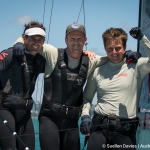 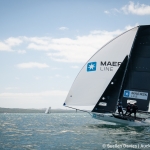