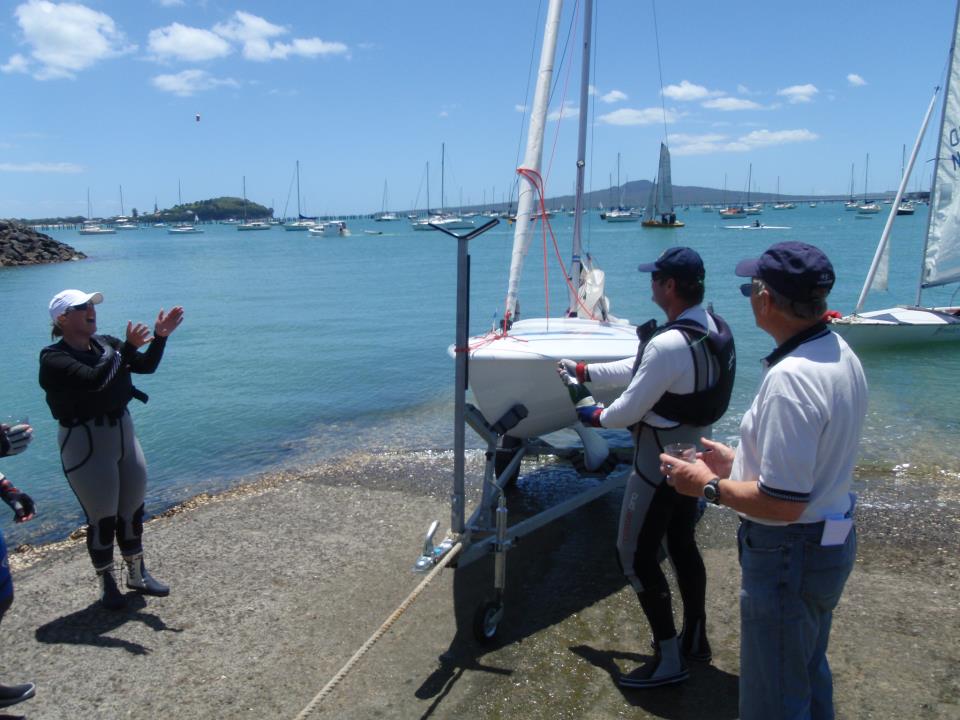 The 21st July 2012 marked a milestone for the Flying Fifteen International class with the launch of the 4000th boat constructed since the design came off the drawing board of legendary designer Uffa Fox in 1947.

The first NZ 4000 series boat took to the water this weekend at RAYC.

“The Godfather” was built by Ovington in the UK, and fitted by Pinnell and Bax before shipping to Auckland. The boat is one of the first off the 2012 mould and like it’s world champion sister ship is an epoxy carbon boat.

Owners Sally Garrett, more recently associated with two-handed sailing (on Expedition Coppelia) and Neil Easton, have sailed in the class since 2006, when Neil decided he wanted to take up sailing. The pair felt the Flying 15 was the only one-design boat that an adult could learn to sail in and quickly be able to race.  Six nationals and the 2009 worlds behind them, Sally and Neil decided to upgrade and  the 2012 Ovington boat seemed the logical choice with the top five boats at the 2011 World Championship having the same hull shape.

“We had an agreement if we had a top 10 finish at the NZ National Champs we were allowed to buy a new boat (at that stage new to us – second hand). Our last 3 years results have been a 8 – 7 – 6, so while I was busy getting ready to sail Round New Zealand, Neil was busy sorting out a new boat. Allan Bax made it super easy to order the boat, Burnard International provided excellent shipping support” said Sally.