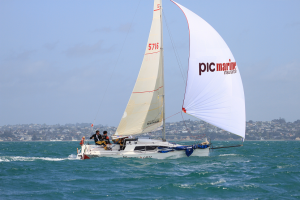 Was a great day for a sail on the Mercenary. The angle of the start line made for an interesting layline into the boat and some tricky time on distance work knowing that we needed the cleanest start possible to delay the inevitable getting rolled by the big boats.

We managed to only just (By a nats whisker) lay around the front of the comittee boat and would have been meerly inches back from the line and able to bear away and start the reach out to Rangi Light. It was a good foot up as we looked back and saw all kinds of shambles at the start behind us. So we settled in and did what we could til getting pinned back by the bigger boats.

With the Upwind work that was looking ahead of us it was never going to be an easy day on an SR26, but we managed to pull off a few good shifts on the first beat to Motutapu and got out of the choppy water by going inshore which helped. It took a while for some of the 40 footers to claw back into us which was nice. (It was the next beat from Motutapu that we felt the boat size a little more!).

A good reach down from Billy Goat point to Motuihe which i sadly chose to go with the Frac Gennaker rather than the big green which once hoisted we knew our mistake but stuck with it for the short distance. But it wasnt fast enough.

The beat up to Passage rock was interesting, very shifty and we seemed to be constantly knocking on both boards getting stuck between shifts and trying to get out of the choppy water which the 26 footer doesnt enjoy.

Once around Passage rock we stuck up the big Masthead kite and cracked a beer, It started to go tighter so we peeled to the Green Masthead gennaker and the boat lit up a bit more, but the breeze was dying and there wasnt quite enough to get the boat solidly planing so it wasnt enough for us to break clear of the waterline race. A nice peel back to the Masthead Kite and a few clean gybes by the crew meant we managed to defend ourselves off the Stewart 34 Promise and finished in not a bad spot. But would have liked a bit more breeze for the downhill, or a bit flatter water upwind.

A thoroughly enjoyable day and cant wait for race 2! 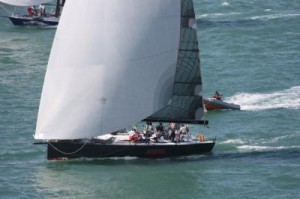 Disappointing day on the Akatea, after nailing the lay line on a very fine start line, we had to dip an Elliot 7 who tacked onto port right in front of us, and to compound the problem, we then had to make another emergency dip on Nosaka who also tacked onto port right in front of us! A dangerous situation, and some very average sailing!
We then ended up with the top of High n’ Fibre’s rig straight through the middle of our mainsail. They were trying to dip us…

Still, I suppose a torn mainsail is better than a couple of T-bones….

XL report. Thanks to organisers and RC.

Had a great race with 888. They caught us halfway to Rangi light sailing up to 2kn quicker, and up to 30deg more heel! A big black ball of spray. We rounded the lighthouse 4 bls behind and had to pinch off their line.

Gennaker was getting partly unrolled from the waves, so we tacked and tied it up. Rounded Billy Goat Pt about 400m behind (~0.5kn slower on average)

The breeze lightened as we got into Motuihe channel and we made a huge gain so that we rounded the 2nd red mark a couple of bls in front.

Upwind we re-trimmed a bit and put a lot of time on by sailing higher and slower. (14kn instead of 15) Maybe 1/2 mile lead at Passage Rk? It seems there is a big crossover in performance around 15kn TWS.

The run was straightforward but very shifty. We oscillated between pinching to lay Browns to having to gybe to avoid Waiheke.

On request of the skipper here is Putikis race report as we had a fantastic race and thoroughly enjoyed it. Thanks to all who made the race happen yesterday and for the person taking photos (its nice to finally have a photo of me sailing a multi 😀 )

Without having a starting watch John and Aaron put us in the best starting position to lead the fleet (very very briefly) until XL and Triple 8 came flying underneath and sneaking through between us and the committee boat, with This Way Up and Hurts like Heaven overtaking us several minutes later to leave us fighting them on corrected time.

As we were expecting the wind to be a little more out of the left we left our screacher up and ready to deploy in case it went right, but we quickly gave up on that idea and had our only screw up for the day when dropping the screecher started to unfurl a little taking a minute to sort out. We followed the rest of the multis by sneaking around Rangi light then set for a beat to Motatapu. Putiki didn’t like the crashing into the waves so we tacked up the Rangi shore line while we watched Hurts like heaven doing the opposite and heading out to sea.

We the Motatpu Straight with only 3 monos passing us (including the new sexy Elliot 35 Crusader) and spent a little bit of time sorting out the screetcher for the slide down the other side of Rangi and Motahi. After a few good bursts and applying the hand brake once or twice we entered the Tamaki straight for the long beat up to passage rock. We firstly headed straight out to Beachlands knocking all the way as the wind finally started to swing to the east forcing us to take over to Waiheke. After reapting this several times we found a mode that was unreal after just being passed by Overload where we were able to point as high as them (9m canting keeler) as we sailed us the coast of waiheke for at least half a hour and lost no ground on all of the keelers.

We rounded passage rock right behind Overlaod and set the challenge of beating them back to the finish which we were unable to do as they quickly flew past us and the 40+ foot monos. We were a little disappointed that the wind had dropped off to around 10-12 knots for the run home as the bigger cats of XL and Tripple 8 were able to fly down the straight without having to gybe unlike us. We quickly caught up to Mr Roosevault but were unable to sail a good angle with the gennaker so we through in some gybes to run some angles and to hope that there might be some wind in the middle of the straight.

After a slow first 20 minutes under kite the wind picked up again allowing us to run from around half way down Waiheke to north head passing most of the monos. This was a great run and very wet as Putiki was often running into the waves in stead of over them or through them (turns out there was a bit of water in the armas). Once we gybed at north head to head home all hell let loose for the monos behind us as Urban Cowboy tried to gybe behind us and they ended up on their side for several minutes and loosing 2 places on line while Nosaka ripped their kite after the finish.

After packing the sails up we headed to the pontoon to find Hurts Like Heaven struggling to dock. We helped them out and beat them out of the water and then headed to Akarana for a drink and a race debrief with them to find out how they went which was a great way to finish an awesome day sailing.

Well done to Triple 8 who sailed a great race to take the provisional handicap hounors (are the results official now?) and thank you to RYC for running yesterdays awesome race and to everyone who has made the Gold cup happen again this year. We are looking forward to race 2 and hopefully a few more multis and or keelers around out performance come out to play.