New Zealand has won gold and bronze at the 2014 49er and 49erFX European Championships in Helsinki with Peter Burling and Blair Tuke successfully defending their title and Alexandra Maloney and Molly Meech taking bronze also repeating their 2013 performance.

Peter Burling and Blair Tuke sealed the deal to win the 2014 European title for the Olympic men’s skiff class in commanding fashion.

Hitting their stride on day two of the six day regatta the kiwi duo won ten of the 16 races sailed in Helsinki ending with a massive 22 point margin over anyone else in the fleet.

The men are delighted. “It was another great day for us today, finishing with a 1, 3, 1 in the three theatre style races,” says Tuke.

“It is an awesome way to finish off what has been a really solid week for us here in Helsinki.”

“We came out with intent this afternoon, wanting to wrap it up as quickly as possible- doing that after race two. After a few quick congrats we got back into it and won the last race to top it off!”

Alexandra Maloney and Molly Meech faced more of a challenge to hold their overnight lead for the 2014 49erFX title with the classy Brazilians and Danes in striking distance.

The kiwis finished with a 3, 9, 6 in their three quick-fire races today returning them the bronze medal.  Sharing the same 60 points total with the Brazilians, Maloney and Meech only just missed the silver medal on count-back.

Congratulations to our 49er sailors! 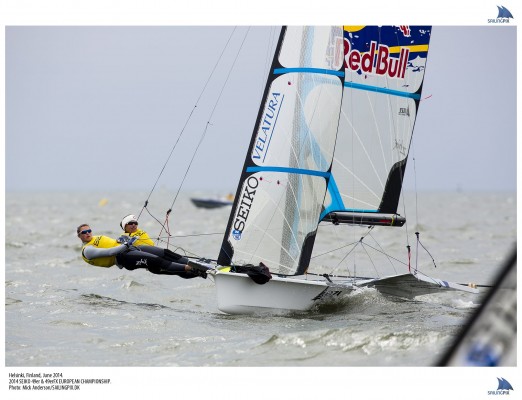